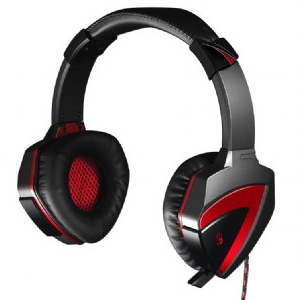 [Originally posted to my PC gaming column at Examiner.com]

They technology behind Bloody’s G501 headset is called “sound to location recognition technology”, which “enables you to adjust the sounds of footsteps, cocking a gun, loading ammunition, and shooting.” (The latter part of that equation requires you to install a small application called Tonemaker that compliments the Bloody G501 drivers.)

The Bloody G501’s core feature set is as follows:

The Bloody G501 has several noteworthy design and comfort features.

The first is the inline controller, which is larger and a little better than the average inline controller from a usability standpoint. It’s large (although very light) and made from soft-touch plastic/rubber, so it’s easy to find and use.

It’s also easy to see in the dark, because it has an LED indicator that changes color depending upon which preset you’re using. The inline controller has standard mic mute/volume controls, and you can use it to switch between the headset’s 3 modes (stereo, surround, and “game”) and 5 sound presets.

The G501 also has thickly cushioned ‘faux-leather’ ear cups, which are both comfortable and provide good external noise reduction. The nicely cushioned ear cups and headband combined with the G501’s light construction make it quite comfortable.

I’m also a big fan of the retractable and flexible hide-away microphone—a feature found on some of my favorite headsets such as the SteelSeries Siberia V2 “Frost” headset. However, it’s omni-directional and seems to pick up a lot of background noise (it was picking up my kids playing in the next room during some Skype sessions).

The G501 software also enables you to alter your voice to one of 4 modes, all of which pretty much suck but can be nonetheless entertaining: “Warcraft” (lower, slower), “Duck” (Chipmunk, really), male-to-female and female-to-male, neither of which would fool anyone and only clue them into the fact that you’re disguising your voice (you creep).

The G501 boasts merely adequate sound, all things considered. Clarity is generally good, but nothing about the sound or its touted ‘sound to location’ technology proved particularly good or even useful.

The surround sound is reasonably functional in games like Left 4 Dead 2 (my general test bed for surround sound), but the various presets—based upon my experience anyway—did little to truly emphasize sounds in a way that was any better or different than any other headset I’ve ever tested.

In the end, it just felt like I was scrolling through equalizer presets (and that’s really all you’re doing), not taking advantage of any new technology that would give you a real-world advantage. I applaud the attempt at innovation, but the practical reality doesn’t hold up to the bullet-point hype.

The surround sound (7.1) setting, for example, sounded more to me like an echo chamber, with each of the 5 presets just another variant thereof. The Stereo setting produced decent music and sound for general listening, and the “Game” setting produced an interesting subset of the previously mentioned echo chamber.

Even using the Bloody’s Tonemaker software—and adjunct to their driver software that serves as a sort of “gaming equalizer”—to adjust settings didn’t seem to make an enormous difference in the actual gaming experience.

The Bloody G501 gets the job done. To recap: Clarity is good, overall sound is adequate, and the bass feels a little light (but I like big bass and I cannot lie).

The Bloody G501 7.1 headset gives you better-than-average comfort and design, but the overall sound quality is at best adequate-to-good. The touted ‘sound-to-location recognition’ technology doesn’t really deliver anything useful in real-world application.

The Mega 5: Worst Candies to Get on Halloween