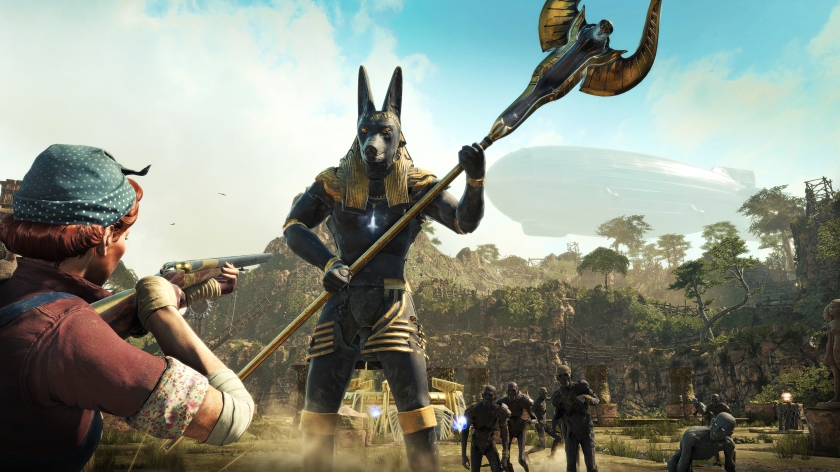 Rebellion’s Strange Brigade pits up to four stalwart adventurers up against hordes of murderous mummies and tricky traps in a co-op action game brimming with golden-age charm and alarming amounts of alliteration.

Basically, Strange Brigade is a 3rd-person co-op action game in which a cast of colorful characters battle hordes of mummies, undead, and other unnatural creatures across tricky terrain– such as dense jungles and ancient temples. It’s a team-based game (although single player is available), and each character brings a different set of skills and weapons to the table; the game simply scales the difficulty with the number of players. For my play time in the video below we were only able to field a team of two.

If you’d like to cut to the chase, my 20-minute play through (with annotations) is below, in which you can…

SEE—co-op cavaliers face off against murderous mummy mayhem!
GASP—at my tortuously feeble gamepad skills!
SCREAM—as I run in horror while my compatriot does all the heavy lifting!

In addition to the expected armaments of various 1930’s guns and grenades, each character has a magical amulet that powers up to unleash an “ultimate” type power.

The environment requires a modicum of puzzle solving to navigate, but it can also be your ally. There’s no shortage of traps, exploding barrels, and other environmental elements you can trigger to help slaughter the hordes of the otherworldly abominations you’ll be facing. Killing foes yields glowing orbs and coins, the former of which charge your special ability and the latter of which can be spent on upgrades at certain checkpoints in the game.

While Strange Brigade boasts the most common elements co-op action games, its truly defining feature is its theme and overall tone. In an age chock full of gritty science fiction and zombie-based shooters, Strange Brigade hearkens to the cheery, more colorful era of black and white serial cinema.

The game cinematic intros are even depicted in slightly grainy black and white film, and your team’s exploits are cheerily narrated by a perky British chap that sounds like he was plucked from Disney’s Jungle Cruise and asked to narrate the Indiana Jones Adventure ride.

Strange Brigade launches August 28th on PS4, Xbox One, and PC. Check out the video above for 20 minutes of actual gameplay by myself and another game journalist.

And I enjoyed Strange Brigade‘s gameplay despite my woeful gamepad skills. That said, I see definite challenges for it ahead in terms of finding and retaining a player base in an increasingly crowded multiplayer market—but I hope its future is as bright as the game itself.

Mega Dads Live #84: SO MUCH PUSSYCATS