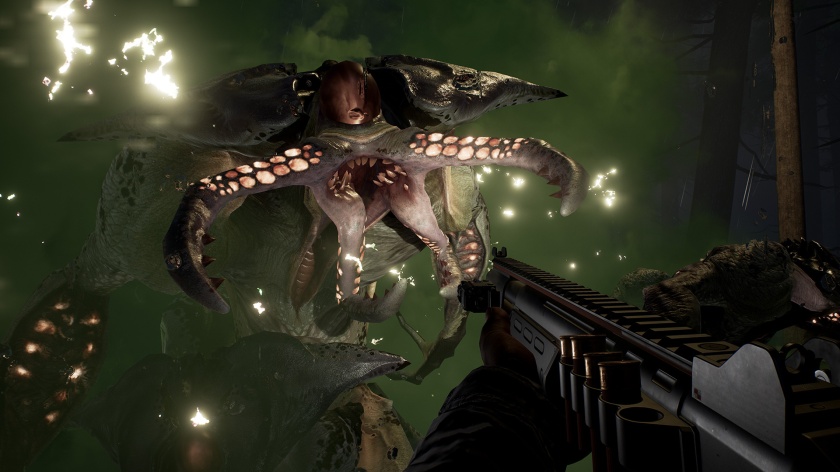 Holospark’s Earthfall is most easily described as ” Left 4 Dead, but with aliens”—something Holospark is happy to confess because they hope to fill the void left when Valve ceased supporting their iconic co-op zombie shooter.

Earthfall pits 4 survivors (Danny, Roy, Maya, and Jonas) as freedom fighters against an alien apocalypse. At E3 2018 I played Earthfall solo (as Roy, with 3 AI teammates) through a single mission, and I’m happy to report that if my playtime accurately reflects the quality of the entire game, then Earthfall should have little trouble filling the shoes Valve abandoned.

Built in the Unreal engine, Earthfall looks beautiful and (most importantly) nails the fast-paced gameplay of its inspiration with some modest innovations that freshen the gameplay without (ahem) alienating Left 4 Dead players.

The weapons feel good and distinct, from the satisfying blast of a shotgun to the raucous clack-clack of an AK47 and the powerful 1-2 punch of twin Desert Eagles (yes, you can dual wield Desert Eagles!) And because this is an alien apocalypse, who knows what other weapons may lurk beyond the realm of standard human technology?

The mission I played felt very much like a Left 4 Dead level, with large, open areas and places to explore for ammunition, health packs, and other supplies. There are always multiple paths and avenues of attack and defense, so you definitely need your teammates (AI or otherwise) to watch your six—and all the other hands of the clock, too.

Some of Holospark’s additions include things such as deployable barricades that can be used to block doorways and fortify temporary strongholds against alien onslaughts. You can even combine barricades with generators to create electric fences, or propane tanks to create literal firewalls. There’s also a moveable, deployable (and devastating) turret, and a larger variety of grenades available such as smoke grenades, frag grenades, and napalm grenades.

Another addition is the 3D ‘print-anything’ printer, which is essentially a weapon crate of goodies. More interestingly, the technology has larger implications for future development for Earthfall. The sky is the limit as to where Holospark could take things if they decided to.

Like Left 4 Dead, Earthfall missions are generally objective-based, punctuated with segments where you must endure an alien horde and one or more boss monsters.

At one point, having activated a generator and alerting the horde to our presence, we quickly holed up in a large storage building where we deployed barricades to block entrances and used propane tanks to create some firewalls. Bracing for the coming onslaught, we grouped up. Aliens clawed at the barricades as we rained a frenzied bullet storm and painted the walls and landscape in alien guts.

Like Left 4 Dead, Earthfall is also driven by an adaptive AI that randomizes and directs the action to help ensure every playthrough is different. So while you might catch a break now and again, if you start kicking copious amounts of butt you may find the next encounter riddled with bosses and more ‘special’ aliens (see below).

While you can still play Left 4 Dead (as I occasionally do), Valve long ago abandoned any further development of it. It can be very hard to even find a straightforward co-op or PvP game, and you’re never guaranteed of a good experience.

Often you end up in an innovative but disorienting mod where all the rules have changed.  Or, you’ll land in some heavily modded, experimental nightmare concocted by inept modders or just trolls with too much time on their hands. Either usually results in a speedy and disappointing exit.

So while cynics may dismiss Earthfall as a mere clone of Left 4 Dead, it’s far more likely to be a ‘savior’ to fans of the original games, and perhaps the closest thing you’ll see to Left 4 Dead 3.

Sappers, like most fathers, are giant walking bags of gas. They charge at you and explode into toxic clouds of fumes. In L4D terms, they are basically a hybrid of the Boomer and Spitter.

Threshers pounce on you and shred your face (think L4D Hunter). Whiplashes look like an Octopuses’ attempt to mimic a Giraffe. They charge and grab a player, attempting to separate and isolate them from the team. It’s the equivalent of the L4D charger, but less intimidating and more Giraffey.

The Enrager floats around and radiates energy that pisses off (buffs) any aliens in its radius. Probably not popular at parties. There’s no direct L4D equivalent.

Earthfall’s bosses include the Blackout and the Beast. The Blackout zooms around the environment very rapidly, has shields, and shoots electrical bolts. It damn near wiped out my party the first time I encountered it).

The Beast is equivalent to the L4D tank; it’s basically a huge, sinewy hulk of muscle that can knock you around. It also shoots energy projectiles from its mouth.