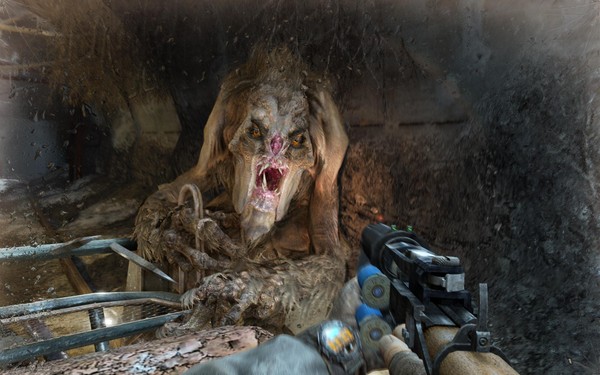 4A Games’ FPS (first person shooter) Metro: Last Light is the sequel to Metro 2033, the game based upon the novel of the same name by Russian author Dmitry Glukhovsky. Last Light is an ambitious but flawed FPS, but its successes ultimately eclipse its shortcomings and deliver a tense, satisfying and entertaining game.

You play as a lone soldier named Artyom, born before just a few years before the nuclear apocalypse that destroyed the world. 20 years later, Artyom’s childhood of sunshine and blues skies is just a pale memory now eclipsed by the daily hell that his world has become—a terrifying, bleak, and colorless world of terrifying mutants, deadly radiation, and unbreathable air.

In Metro 2033, Artyom destroyed a race of mutants called Dark Ones—or at least that’s the assumption. (Spolier Alert: there is an alternate ending in Metro 2033 where Artyomdoesn’t destroy the Dark Ones, but Metro: Last Light starts with the assumption that you blew them all to hell in a hail of missiles—inflicting on them the same fate humanity inflicted on themselves.

In Metro: Last Light, a sole Dark One survivor—a child—is discovered. Artyom is ordered to find it and kill it.

But contrary to their ominous name, the Dark Ones are not so very dark at all—and in fact are a peaceful, intelligent race of mutants that simply wanted to make contact with humans. Artyom shares a special connection with them, and has begun to question and regret his actions in the first game that lead to their destruction.

But even though the Dark One is an important plot point, the larger plot concerns a summit of underground factions meeting to discuss peace—and a sinister plan to ensure it all ends in a bloody war and only one faction is left standing strong.

The Moscow Metro is a vast underground network of bomb bunkers-turned-cities, the whole of which begs to be explored and plundered for its secrets despite the terrors it holds.

And if you’ve got the hardware to run it (Deep Silver recommends a quad-core CPU and GeForce 660ti/ DirectX 11 for the best experience), Metro: Last Light is gorgeous in all its stark, terrifying glory. The Metro as a whole arguably rivals Bioshock Infinite’s Columbia in terms of visual quality and the rich backstory of its world and inhabitants.

Unfortunately, you don’t get a lot of time to appreciate it all or take it in. Most of the ‘town’ sequences are fairly short and linear, and serve as little more than way stations to stock up on ammunition and new weapons. Most of the game is spent creeping through dark tunnels trying not to get eaten by mutants, shot by enemies, or killed by asphyxiation in the deadly post-apocalyptic air.

In Metro, being a ‘badass’ or a ‘hero’ means you survived one more day.

Running out of gas

Like Metro 2033, the poisoned, desolate apocalyptic Earth can and will kill you in a variety of horrible ways. If a mutant doesn’t eat your face, lingering radiation will melt it off. Or the deadly air will burn up your lungs and you’ll die gasping for breath, your last thoughts of those you have failed but possibly embracing the exit from such a bleak, miserable, and seemingly hopeless world.

Staying alive means breathing, and that means you must wear a gas mask any time you’re outside the Metro (which is most of the game). I like that you have to occasionally wipe off your gas mask (press G on the keyboard) to improve visibility–for example, wiping the blood or muck off of it. You’ll also need to replace it periodically after it becomes cracked or damaged.

More importantly, you must also maintain a steady supply of air filters for your mask to keep yourself breathing. The air filters are effectively a “death timer” that is constantly ticking down. When a filter runs out, you have about 20-30 (real) seconds to replace it before Artyom asphyxiates and you have to restore from the last checkpoint.

I generally dislike this mechanic, much as I didn’t like the same mechanic in Dead Space 2 when you had to spacewalk. Unlike Dead Space however, which limits ‘time until death’ sequences to fairly short, linear sequences, Metro: Last Light uses them throughout most of the game—and the game is pretty merciless. At one point I had to restart an entire chapter because I didn’t have enough gas mask filters to survive from my last checkpoint. (This only happened once, however, playing the game on Normal difficulty.)

The air filter/death timer mechanic increases the tension and urgency of the game, but it also becomes frustrating, and limits exploration, even though there are plenty of places to explore off the beaten path. It’s also worsened by the fact that Metro: Last Light doesn’t provide a HUD (heads-up display) or additional indicators as to where your objectives lie—this frequently leaves you trying to figure out where to go (which is often not obvious), racing against time and running for your life from everything trying to kill you.

Of Men and Mutants

The stealth mechanics in Metro: Last Light are rudimentary but they work. Stick to the shadows, sneak up from behind, and you can kill/disable human opponents. Your watch glows blue if you are visible to your enemies. Curiously, you have the option to knock out or stealth-kill enemies, but there’s no clear reason why you’d choose one over the other from a practical perspective.

The stealth-oriented levels are well-designed and feature plenty of places to climb through grates, lurk in corners, or climb to higher elevations to avoid guards. You can shoot out lights, unscrew light bulbs, and turn off circuit breakers to keep your enemies in the dark while you take them out.Metro: Last Light doesn’t rank alongside the likes of Deus Ex: Human Revolution, (in terms of stealth gameplay) but it still delivers a satisfying stealth experience. Sometimes it actually feels a little too forgiving.

Stealth is essential against human opponents to whittle down enemy numbers until you’re ready to strike more openly. You’re always outnumbered, and the direct ‘guns blazing’ approach can cost a lot of ammunition and supplies. While I wouldn’t characterize Last Light as survival horror, on Normal difficulty it straddles the line. That means ammunition is scarcer and more precious than it is in many FPS games, so you need to be a little more calculated in how and when you attack.

But you can still can’t kick some butt—at least against human opponents. However, you’ll learn quickly to hate and fear mutants more than anything, all of whom are fast, tough, and generally like to attack in large groups—and often in the dark.

Aside from some mines and grenades (rare commodities), forget about just blowing mutants to hell with the casual cigar-chomping swagger of some FPS game protagonists. There are no BFG’s, flaming rocket-launching chainsaws, or railguns. You have shotguns, machine guns, pistols, and even air-powered rifles—all of which come in a variety of types with various modifications (scopes, stabilizers, etc.). But your best ‘anti-mutant’ tactic is accuracy, staying cool under pressure, and the timeless wisdom of Zombieland: “cardio”.

The various mutants in the game aren’t distinctly named, at least not within the context of the game—but all of them require very different tactics to deal with (and a lot of cardio). For example:

In addition to the limited checkpoint-based save game system that can screw you into a corner from which you can’t escape (short of restarting a chapter), there are a few other minor annoyances as well. First, the game takes control away too often during cinematic sequences that occur in the middle of gameplay—for example, an explosion occurs, and then you’re suddenly watching the game happen to you as Artyom is flung through the air (still in first person view), only to return control once the event is finished.

This is fine used sparingly, but too much becomes jarring and irksome. A particularly annoying example is falling into the swamp—and it’s not even ‘cinematic’, it’s just when you screw up and fall in the water—at which point your’re punished with about 5 seconds of a basically non-interactive sequence watching Artyom swim and climb out of the swamp. Pray there isn’t something nasty waiting for you when control is returned to you.

The game’s story also takes a few strange turns and crosses wires a little. It’s a post-apocalyptic survival story with an evil political conspiracy that suddenly dips into some weird mysticism regarding the Dark Ones.

No, it doesn’t all quite make perfect sense. I may have missed a memo (i.e. conversation) or two, but I didn’t entirely follow everything perfectly; It’s almost like we need a deleted scenes reel (or perhaps to have read the books) to make better sense of it all.

And while the game’s single-player game (which takes about 10-12 hours to complete on Normal) ends with a bang, the overall climax seems rather short—and there’s no multiplayer and little replay value to the game once you’ve finished it.

The strengths of Metro: Last Light ultimately overcome its weaknesses and deliver a solid stealth/FPS/survival horror-esque shooter in the most beautiful, ugly, bleak, and depressing world you’ve ever seen. (I would have loved to experience it in 3D.)

The single player game (on Normal Difficulty) is about 10-12 hours long. There is no multiplayer.

More of my articles at Examiner.com