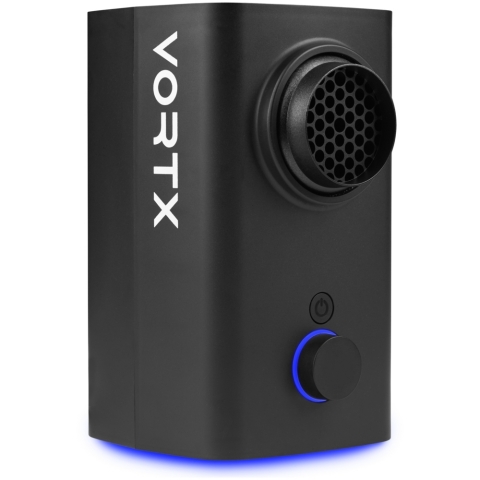 Many companies are still trying to stake a claim in the (slowly) growing VR gaming landscape, thinking beyond the VR headset itself and looking to accessories to enhance the immersion. In recent years we’ve seen reactive rumble vests, VR controllers built into rings, and in-place treadmills like the Omni Virtuix, to name just a few. We’re still a ways off from “Ready Player One” level VR gaming, but innovation continues

VortX wants to blow your face off

Increasing immersion through simulated air flow is an intriguing idea, although it seems like a largely extraneous embellishment. Once I experienced it I definitely appreciated its potential. However, the true potential (and challenge) for airflow-enhanced gaming probably lies in scalability.

The VortX uses reactive, proprietary algorithms that interpret in-game action and audio and translate that to air flow, adjusting temperature and force as needed to simulate the rush of air you from a fiery explosion, racing on a motorcycle, or running and gunning your way through an FPS.

The VortX connects to your PC through a USB cable and also requires a standard 120v outlet for power. The VortX driver software allows you to customize the sensitivity of the fan, the temperature of the air, and the color of the LED ring.

You can customize these settings from the VortX itself by simply pressing the dial on the front of VortX and then turning it to change a setting, although it’s not obvious from the front of the device which setting you’re changing. You can also adjust the angle of the VortX’s fan up or down by about 15 degrees.

Additional features are coming in early November but weren’t available at the time of this review.  (See the end of the article for a sneak peek of what’s to come.)

In the absence of a VR headset, I tried the VortX in a few different games, including Blizzard’s Overwatch, a first-person survival horror game called The Conjuring House (Rym Games),  and Bethesda’s Fallout 4. I also played an entertaining racer called Antigraviator (Iceberg Interactive).

In The Conjuring House, the VortX enhanced the spooky atmosphere with its constant but varied howling winds. In this case, it was the sound of the VortX more than the force of its fan that added to the experience. I appreciated this same effect exploring the desolate wasteland in Fallout 4, where the VortX’s added howling, desolate wind effects that I’d previously only imagined.

In general run-and-gun FPS games, the sensation of having wind blow in your face with your movement and other on-screen action certainly didn’t hurt the experience, but I can’t honestly say it didn’t strike me as something I felt I’ve been missing all these years. It did little to enhance Overwatch, for example.

I would have thought a racing game like Antigraviator would be the perfect use for the VortX, but in this case, the VortX had the least impact. I was so focused on making turns and dodging obstacles that I barely noticed the VortX at all—even at its loudest, strongest levels.

And it should be noted that the VortX can get pretty loud, hissy, and even whiny at times while it idles, and this can be a bit of a problem. I can see why it would be best-suited to VR games where you could feel it but probably wouldn’t hear it as much. And outside of VR it may be best suited to gaming with a headset so you can feel it more than hear it.

But based on my experiences with certain games the VortX adds more when you can hear it. And at other times, it can be loud and distracting. (This might even suggest further developing the device in a way so users can, to some degree, adjust wind output independently from audio output.)

There’s no frame of reference for a reactive fan device, so I don’t feel it’s fair to assign a “good” or “bad” rating. I liked some of the VortX’s effects and it wasn’t generally obtrusive, although it could get a bit overbearing at times.

Regardless, I never really felt like it was something that added all that much to my gaming either, or at least not enough at this scale for $120. It’s a pretty pricey add-on for a relatively niche-use.

I can, however, imagine that being surrounded by several VortX’s with positional wind effects could offer a truly more immersive experience, but the technology for such hasn’t been developed yet (maybe VortX is working on it), and even if it is the price-point for such a setup would make it a very expensive and even more niche device.

Just prior to publication I was informed of a host of a new software features coming to the VortX in early November. Here’s the breakdown:

Improved accuracy for tracking and triggering fire and heat sources via:

This addition serves as a framework for future developments by providing a significant path to improved accuracy across all media and inputs.

Streamer Mode is a free new software enhancement to Vortx. Streamers and their audiences will be able to physically interact from the comfort of their own homes. Logging in through Twitch will allow users to have Vortx provide custom notifications for:

It will also add interactive ChatBot integrations for Streamers with:

Toggle between two additional states: Fan/Heater Mode will allow you to turn Vortx into a desktop fan or heater. You can adjust the temperature and intensity directly using the control panel or the dial on the unit.