Stephen Alexander, former lead effects artist for Bioshock Infinite (and 1/6 of game developer Question), partners up with me at PAX West 2018 for a harrowing tour of The Blackout Club, Question’s co-op horror game coming in 2019.

Spoiler: It doesn’t go well for us.

The residents of a sleepy town repeatedly black out and wake up dirty and muddy, with no memory of where they’ve been or what they’ve done. Some teens grow suspicious, but can’t prove anything is happening to the town’s stubbornly dismissive adults.

Then a friend goes missing, and four teens band together to investigate the mystery— and record evidence to prove they aren’t crazy.

It’s a concept that will likely draw some comparisons to the hit Netflix show Stranger Things (and in turn some its inspirations), but The Blackout Club isn’t trying to be just another game tapping into a retro 80’s aesthetic. It may play some familiar notes, but it’s not copying the music.

The question is who is Question?

While Question may be a small 6-person team, they are not a green ‘garage band’ of indie devs. Question are veteran game developers with AAA credentials who, like many of their contemporaries in recent years, have turned to the indie space to pursue more intimate, personal projects.

Their first game, The Magic Circle (2015), is a humorous, unusual game (and commentary) on the sometimes comical, often hellish world of game development. (It’s also highly rated on Steam, so you might want to check it out.)

The Blackout Club: It all begins with a cliff

OK, actually it doesn’t begin with a cliff. There is a cliff though.

Normally, you begin The Blackout Club with a base character and there’s a single-player prologue/tutorial to get you up to speed. But for our playthrough, time was short, so Stephen started us further into the game with higher level characters, allowing us to pick some skills and equipment. I opted for a crossbow, tranquilizer dart, and improved stamina for running. (I figured we’d be doing a lot of running.)

Starting further into the game as we did, Stephen was essentially and metaphorically throwing me “out of the nest” so I could learn to fly.

I basically flapped my arms very hard and then plummeted to my death, asking “Am I supposed to go this way?” as I innocently walk off a cliff into a sea of mist to my doom.

If Stephen Alexander were a bird, he would be a terrible mother. And on an unrelated side note, probably just a terrible bird, because he’s also the guy who created the scene in Bioshock Infinite that nearly traumatized my youngest child.

“Uh, no. Hang on…you’ll respawn and I can get you back,” he says calmly.

I did in fact respawn, but I came back as a sort of “zombie”, apparently under the thrall of the mysterious force controlling the neighborhood.

Several adults were already shambling about the streets, all of them dressed in white, creepy, cult-like robes with veils over their faces. Stephen barely managed to out-maneuver three of them and revive me (wake me up) so I could rejoin him.

“It’s generally easier with four players,” he says. “And we’re still early in development and tweaking a lot of gameplay,” he adds.

Run and hide. A lot.

Back in the game, we quickly run and climb over a fence into a nearby backyard, huddling behind a tree while scoping out the house where our objective awaits. There are some open windows on the upper floor and a beckoning back door.

I was impressed by the fluid, seamless parkour-like control that enabled us to easily scale the fence. It didn’t require difficult keyboard/controller acrobatics, nor was it hampered by obnoxious (i.e. poorly implemented) physics.

We needed to get inside the house to our objective and record evidence of whatever it was (we wouldn’t know until we found it) on our smartphones. If successful, we’d receive another objective and advance. A session of The Blackout Club generally consists of completing a series of objectives, each taking you deeper into the mystery and providing more answers—and still more questions.

Unfortunately, several adults walk out the back door and into the yard where we’re hiding. We remain quietly behind the tree to avoid detection, waiting for an opportunity to incapacitate them or simply dart by them and into the house through the back door.

Overhead, drones with cameras periodically circle the area searching for us. If they spot us, they will alert The Shape, who will begin hunting us.

The drones are out of sight, so we madly dash toward the back door, trying to “thread the needle” through the adults. It goes horribly wrong.

The adults are onto us. Stephen jumps onto one of their backs trying to incapacitate one while I (bravely!) keep my distance, using my only tranquilizer dart to take out another. We hastily skirt inside the house and upstairs before the drones circle back. But the scuffle likely gave us away so our time is limited.

And sure enough, The Shape has gotten wind of us and begins searching the house. 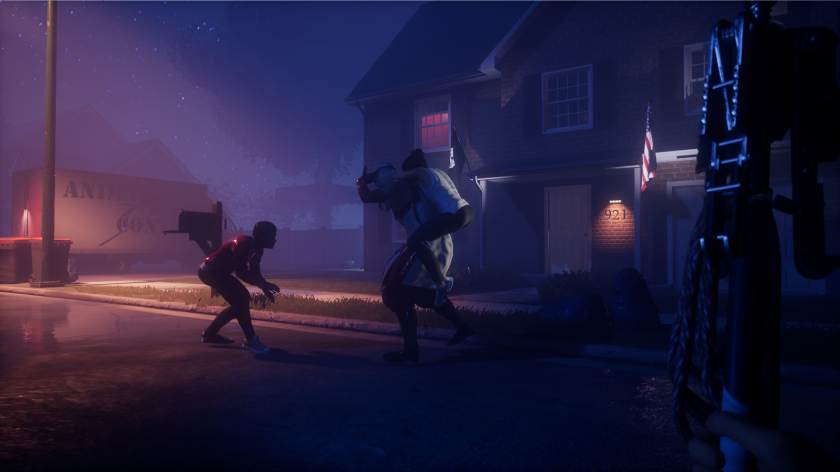 The Shape is the mysterious entity controlling everyone. It is not omniscient and must hunt by sound, sight, and your last location.  You can only “see” it (and adults it controls) if you close your eyes by pressing Z on the keyboard (or the equivalent controller button).

Running, hiding, and closing your eyes is an actual survival mechanism. Closing your eyes reveals the general location and distance of enemies controlled by The Shape. Everything goes black, but you can see vague, ethereal forms and get a general idea of their position relative to yours.

Sneaking through the house towards our objective, Stephen moved to another room, where he was then overwhelmed by an adult and incapacitated. The Shape was now in the house and actively searching for us.

I remained hidden, trying to figure out how to get to Stephen and revive him. I carefully exited the closet. There were still adults in the house. One burst into the room and I rushed to a window to open it and jump onto the roof.

“Yeah, we think we’re probably going to make it so you can open windows from the inside… in a future build,” Stephen informs me as the adult corners me and knocks me unconscious.

“Argh,” I mutter, as we get ready to restart. Maybe I should have taken a taser instead of the tranquilizer dart.

Good thrills, not cheap ones

Even at this relatively early stage, The Blackout Club is thrilling good fun that relies on artfully created story, atmosphere, and tension.

This is both by design as a game and the design of the story. You cannot fight The Shape—-you can only run and hide. And while you can incapacitate enslaved adults, your resources are limited, the adults outnumber you, and they are larger and stronger.

But more importantly, the adults are likely neighborhood friends or even your own parents being controlled by The Shape. This creates a very real moral imperative that is often missing from stealth, horror, and action games.

In The Blackout Club, simply beating an enemy to death with a shovel is not a good (or acceptable) solution. Everyone would wake up the next day, someone’s parent might be dead, and high school just got even more awkward. And what if you killed your own parent or one of your friends’ parents?

Hence The Blackout Club relies on atmosphere and the taut thrill of hide-and-seek and stealth-horror games and not tired cat-scares or weak attempts at shock value. It’s entirely bloodless. (It’s the horror game for the whole family!)

Although I only experienced the streets, yards, and inside of a few houses in a suburban neighborhood (and not for very long before I got a beatdown), your investigations will eventually lead you to the underground tunnels below, where The Shape commands its minions to dig tunnels that are apparently being used as a sort of bizarre, musical instrument (watch the trailer).

What is the Shape doing and why? What does it want?

While you can discover many clues and lore in the game that may shed some light on its shadowy agenda, don’t expect a concrete, succinct answer to emerge—ever.

“There are lots of clues and lore in the game you can find, but there isn’t an ‘end-game’ or ‘final answer’ waiting to be discovered.” Stephen tells me.

Which is a good thing. The Blackout Club is a game that Question wants to you to keep questioning and theorizing about for a long time—not something to be spoiled less than 24 hours after release by hardcore players and the fastest Redditor.

To that end, the missions and many elements in them are semi-randomized. Clues, lore, objectives, and other elements will change from session to session, as will the location of items, which windows are open, and other elements to keep you guessing. You’ll get pieces the more you play, but there always be… more questions.

Maps, however, will remain the same so dedicated players can still enjoy the fruits of their hard-earned map knowledge. And there are multiple skill tracks and loadouts you can level up and equip to mix and match with other players.

Question has even experimented with some PvP elements that may introduce another teen working against the protagonists, recording them and alerting The Shape to their presence. (It’s basically a potential mode for people that like to play the spoiler/griefer. )

The mystery will continue, the future awaits

Backed by top-tier developers with strong narrative chops and the passion to deliver something new, The Blackout Club is an extremely promising co-op horror game that hopefully shines brightly when it arrives in Q1 2019 on PlayStation 4, Xbox One, and PC.

More info about The Blackout Club: