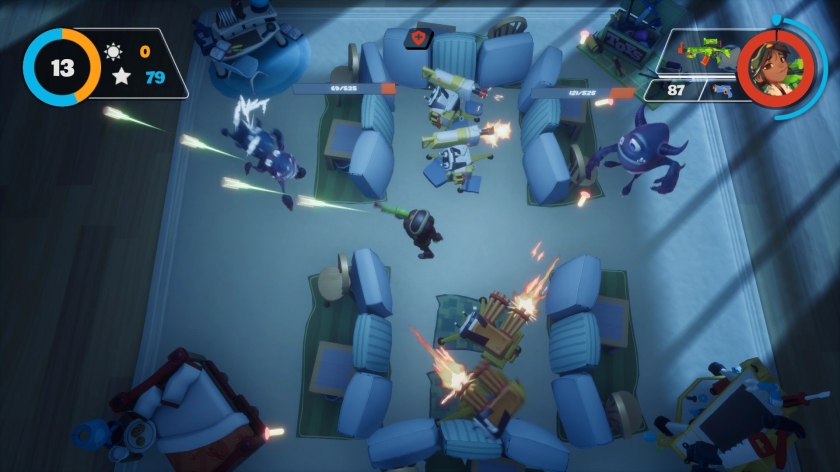 We are Fuzzy’s Sleep Tight is an entertaining, kid-friendly romp that feels like the spiritual child of Pixar’s Monsters Inc. and Smash TV. But despite a few interesting game modes, a glaring lack of multiplayer largely relegates it to whimsical, shallow fare for adults and kids alike.

Sleep Tight is basically a classic twin-stick shooter (although it plays well, if not better, with a keyboard and mouse), but in between each wave of monster attacks you can purchase powerups, build defenses (pillow forts and turrets), and stock up on health and ammo. And then you can do it all again.

As in any twin-stick shooter, successive waves increase in difficulty, although Sleep Tight ramps up pretty gradually. Even if it didn’t, odds are pretty good that both kids and adults will handle the increased pressure just fine—even those of us that weren’t crushing Robotron or Smash TV “back in the day”.

During the fluff-filled carnage, you must gather stars dropped by the monsters to purchase defenses and upgrades in between stages. You also get a number of suns to spend on things like health, ammo, and powerups. Once you’ve built your defenses, night falls, closets open, and the monsters rise again.

Sleep Tight sports 12 playable characters that you can unlock, each with their own distinctive playstyle and weapons. In addition, five of the kids provide new game types: Tommy’s first-person shooter mode, Picasso’s “Ultimate Pillow Fort” mode, and Kodie’s “Trial of the Teddy” mode.

And if you’re a fan of leaderboards and streamers, Sleep Tight also features Mixer integration, which lets you interact with your favorite live streamers and their games, where you can do things such as drop more ammo or spawn monsters for them to obliterate with water balloons.

As interesting as this integration is, however, it’s unfortunate that a game with spiritual roots in a co-op shooter game does not, in fact, provide co-op play.

As much as I enjoy the game in short stints, lack of multiplayer seems like a glaring oversight. This is a game that would be great for kids to play with their friends and parents. And while it’s entertaining enough for a short while, it’s not something likely to tear you away from your gaming mainstays (Overwatch, Fortnite, etc.). It’s a low-commitment title, good for unwinding for a few mindless rounds of monster-blasting.

Entertaining and kid-friendly though it is, Sleep Tight probably won’t keep you up at night playing it, and it hovers (unfortunately) within the well-made-but-relatively-meh spectrum. (It also, at times, felt a bit tinged with the touch of corporate adults trying to appeal to a younger audience.)

Multiplayer would be a welcome addition and improve it considerably.