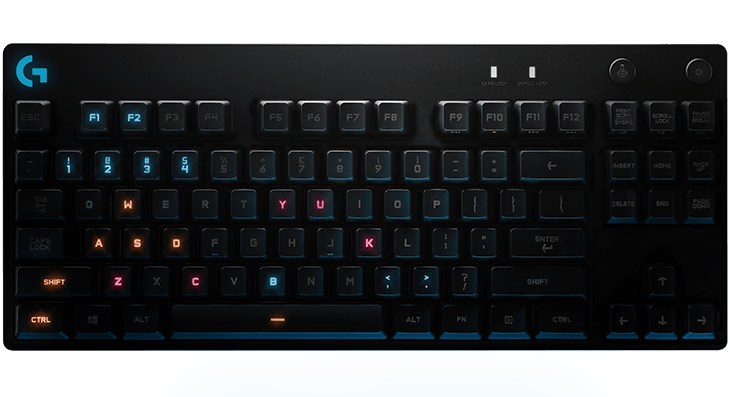 The Logitech G-Pro mechanical keyboard distills the most important features of a gaming keyboard into a package that is as compact as it is responsive.

The G-Pro doesn’t offer what some might consider extraneous features, so if you love dedicated, programmable macro keys, dedicated media controls, etc. then it’s probably not for you.

But if you want a responsive, quiet, mechanical keyboard in a compact, space-saving and travel-friendly size, look no further. You don’t need to be a pro or play like one to justify owning it—you just need to love fast, efficient, and well-designed mechanical keyboards.

The Logitech G-Pro keyboard’s other defining characteristic is its size, which is as compact as possible—even when compared to some competing ten-keyless designs. A detachable USB cable with a 3-prong connector for added stability makes the Logitech Pro travel-friendly, aside from its considerable (2.2LB) heft and steel backplate. It may be small but it’s no lightweight, and it’s very solid and stable on the desktop.

Rounding out the Logitech G-Pro features are a dedicated Game Mode button for shutting off the annoying Windows key, and a button to turn off the RGB backlighting.

Like other Logitech gaming products, you can further customize the G-Pro’s lighting and program macros (for the F1-F12 keys) using Logitech’s gaming software. The software also allows you to store lighting profiles based on your favorite games. (And for competitive gamers, the custom profiles are stored internally and will still work at events that don’t allow additional software to be installed.)

I’ve been a fan of Logitech’s Romer-G switches and have steadily used their G910 Orion Spark keyboard since it was first introduced. The Logitech G-Pro largely feels like a stripped-down, more efficient version of the Orion Spark. Typing and gaming on it are both quick, smooth, and quiet.

Logitech claims to have improved the Logitech G-Pro’s responsiveness through improved KSP (Keystroke Signal Processing), which makes the Logitech Pro “up to 10ms faster than the competition”.

In addition, the G-Pro is capable of 26-key rollover—which may as well be “sh*tload-key rollover”. It basically means you never have to worry about lost keystrokes, no matter how fast you are. I’ll just take their word for it because it’s not easily measurable or discernible in everyday typing and gaming (at least not for mere mortals).

The only features I personally miss when I use the G-Pro are dedicated macro keys, which I use occasionally for both work and gaming, and the dedicated volume control found on the Orion Spark, which I use constantly. Were it not for its lack of these 2 features I’d definitely replace my Orion Spark with the Logitech Pro for the Pro’s minimalist design and to save some desk space.

The Logitech G-Pro keyboard is an elegant, compact powerhouse with best-in-class gaming prowess. It’s space efficient, relatively travel-friendly, and a joy to game and work on. You can grab one for about $100 on Amazon and other e-tailers.