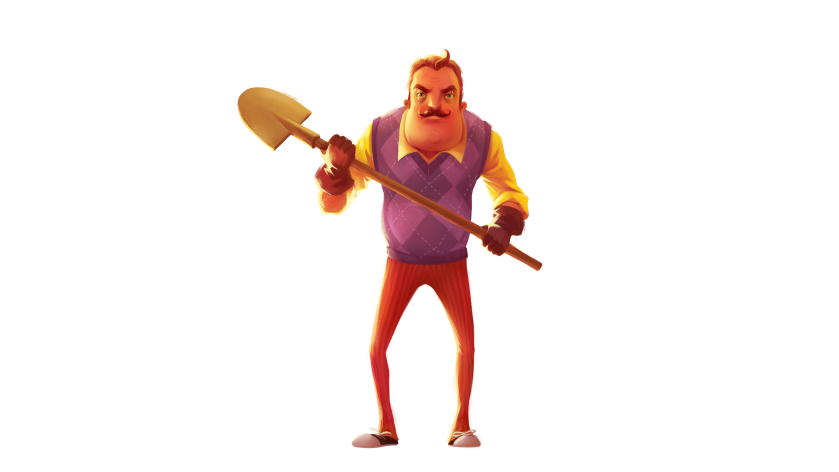 TinyBuild’s Hello Neighbor is a game you want to like but defies even the most forgiving gamers, testing your patience and ultimately falling short of its inspired premise.

Hello Neighbor is a stealth-horror (ish) game based on sneaking around a mysterious neighbor’s house to expose his dark secrets. Fundamentally, it combines a tense game of hide-and-seek with the exploration, logic, and story-based puzzles of adventure games.

It’s intriguing from the beginning, with its odd art style and lack of any dialog. Hello Neighbor is a visual experience that challenges you to solve its puzzles and piece together its abstractions, all while avoiding, confounding, and sometimes manipulating the neighbor’s behavior.

This is, of course, assuming you can tolerate the game’s many technical and gameplay problems. 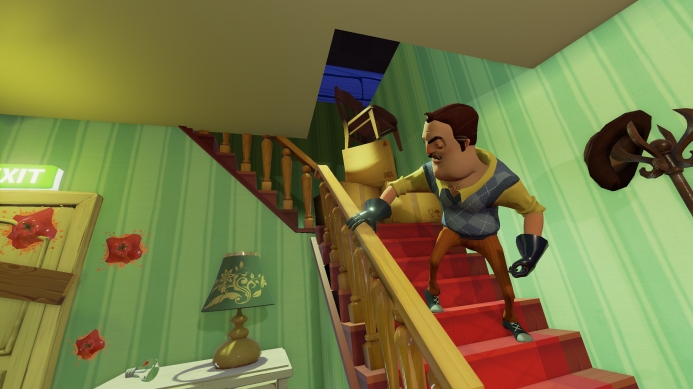 Working against an intelligent AI, frantic chases, and hiding fearfully in closets can all be exhilarating when they are done well. Alien Isolation is a good example of a game that combines these elements successfully to deliver a compelling, thrilling, and terrifying experience.

Unfortunately, Hello Neighbor never really achieves its aspirations. The game’s mystery is the most compelling part of the game, but the gameplay otherwise falls short.

The neighbor, for example, reacts to your actions but to a seemingly limited degree. And aside from reacting to various ways you can manipulate him, he primarily has two basic modes: searching for you and not searching for you.

For example, if you shut off the power to the house at the breaker switch, the neighbor predictably exits the house to fix the problem, which gives you a chance to sneak into the house. If you break a window, the neighbor will repair it. He will also set traps to thwart your efforts, like placing a bucket of water over a door.

But as soon as the neighbor sees or hears you in virtually any capacity whatsoever,  he flies into search mode, much like any predictable goon in the ‘stealth level’ of any FPS/action game ever. You can hide in closets and try to stay out of sight, but there rarely seems to be any real rhyme or reason for his searches. He mostly just runs around frantically.

In addition, the game doesn’t provide any mechanism for you to know (or suspect) where he is or how quiet or visible you are—only a thumping heartbeat that rises when he’s near. This would be fine if the game was less arbitrary about how he acts or searches for you. But generally, he just goes into search mode the minute you make a noise, bump something, leave a door open, etc.

You can mostly just expect him to be searching constantly despite your best efforts. And as much as fun as the ‘thrill of the hunt’ can be when you’re the hunted, it hampers the exploration and puzzle solving part of the game. You rarely have the time to search, think, or solve puzzles in any satisfying way. And hiding and waiting to reset the neighbor quickly grows boring and tedious.

Instead, you’re more likely to get caught repeatedly and forced to advance your agenda in between constant and increasingly annoying resets. This works against the tension the game seeks to build; as frustration and impatience take over, you may resort to just ‘speed running’ through a task hoping to accomplish it before the neighbor catches or finds you.

Two additional problems with Hello Neighbor (on the PC at least) are its very slippery controls and physics, both of which frustrate your efforts to do even simple tasks—especially if you need to do them quickly.

The physics, first and foremost, make climbing and jumping like skidding across ice with tiny glider wings. Stacking items, jumping atop them and running/jumping across the roof usually took 2 or 3 tries, and sent me sailing across the roof and onto the ground— where I was often seen or discovered by the neighbor, and forced to run, hide, or simply move across the street until he reset.

Even in the best of circumstances, simple tasks like stacking items to create a path to higher ground is like building a house of cards with giant balloon hands. In addition, items you can interact with or ‘activate’ often don’t unless you aim the mouse at the exact right spot and then press ‘e’ (use/activate). This often left me convinced I wasn’t doing the right thing—until frustration drove me to a walkthrough that confirmed I was, in fact, doing the right thing. The controls were just being finicky.

The poor controls seriously undermine your confidence in the game early on, further testing your resolve to like the game, and possibly force you to question your sanity.

Another ugly issue: If you are reset to the beginning of the checkpoint but dropped a crucial item (accidentally or on purpose), you may never be able to find it again unless you recall exactly where you dropped it. Good luck if it was underneath another object.

The game makes no allowances for such mistakes, and you may just have to restart the Act and relive all of its frustrations.

If Hello Neighbor could live up to its potential and deliver its wonderful, metaphorical and intriguing story with the advanced AI and taut gameplay it deserves, it would be a fantastic game—perhaps even a classic.

But even after hours of play, I had to face the fact that it was a buggy, frustrating and infuriating mess that couldn’t live up to what I’d hoped for. I loved the idea of the game. But I hated playing it.

Unless you have herculean desire to overcome its many frustrations, Hello Neighbor is downright un-neighborly.