Creative Labs has ventures forth from sound technology into the realm of gaming keyboards and gaming mice with the Sound BlasterX Siege M04 gaming mouse, a mid-tier, ‘all-rounder’ gaming mouse with a good range of features and a comfortable design — and a notable flaw.

The Siege M04 features matte plastic construction along the top and back of the mouse, with textured rubber side panels. It’s clearly aimed at the ‘all-rounder’ category, with a right-handed ergonomic shape and 7 fully-programmable buttons, i.e. 3 standard buttons (left, scroll/middle, and right-click), 3 thumb buttons,  and a single top button behind the scroll wheel.

The base of the mouse features customizable LED lighting that can be set to a variety of effects (pulse, wave, etc.). The scroll wheel and ‘X’ logo also glow (white and red, respectively), but cannot be customized individually.

I used the Siege mouse for gaming and general PC use for about 2 weeks, mostly sticking to games such as Hi-Rez Studios SMITE, Blizzard’s Overwatch, and a few other titles, including KrillByte’s Among the Sleep and tinyBuild’s (highly entertaining) Mr. Shifty.

In terms of its overall shape, design, and features, the Siege M04 sticks to a fairly standard formula and scores predictably well. It’s comfortable. I like the strong, ‘clicky’ tactile response of its switches.

Speaking as someone who prefers textured rubber side grips I found it to be very comfortable and eminently ‘grippable’ for claw-style and fingertip grips. It tracks cleanly and smoothly as you’d expect for a high-end optical sensor.

Despite its successes, however, the the Siege M04 suffers from some ‘Freshman’ product issues.

First, the Sniper thumb button is too far forward to be easily reached — unless you have giant banana hands anyway. In the case of the Siege M04, I found the ‘Sniper’ button (which incidentally can be re-purposed to other tasks or macros) to be located too far forward on the mouse to reach comfortably with my thumb. This isn’t really an uncommon problem for a lot of gaming mice with similar features. The Siege M04 sniper button is just probably better suited to rarely-used commands or macros that don’t need to be accessed quickly.

That said, driver software can (and will be) improved over time, and many (if not most) gaming mice suffer from one or more poorly placed buttons. And different grip styles or mouse usage may contradict those that I deem poorly placed. 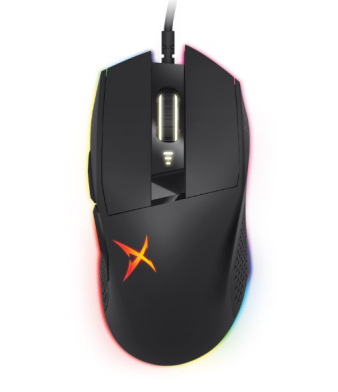 But I found a much more notable flaw with the Siege M04 in that the thumb button response is noticeably sluggish.

Using the same macro with my Clutch G1 the action is instantaneous. But with the Siege M04 there’s a noticeable delay between the button press and the execution of the command.

I can only guess that maybe it has something to do with increased resistance and actuation distance (i.e. the distance the button travels before registering a click), but I’m not sure. Maybe I just need to press the button faster and harder, but that scarcely seems like a solution.