The HyperX Cloud II is a pretty ‘basic’ headset but it includes some appreciated extras: memory foam ear cushions you can use to swap out for the standard leatherette ones, and a nice drawstring carry bag with 2 pockets if you want to travel with the headset. 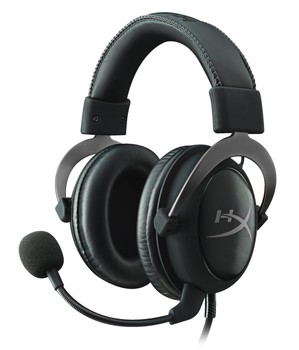 The HyperX Cloud II is not designed for travel, but it is light and the extra pocket on the carry bag is a smart addition.

(In my experience most headset carry bags requires you stuff the headset and any required accessories/extras into a single pocket, and it’s rarely an easy fit.)

The Cloud II’s inline remote is also above average in terms of design and usability. It’s larger than average, clearly labeled, and partially backlit. The buttons are easy to find, identify, and press, and the red LED HyperX logo and centrally-placed ‘7.1’ button make it easy to find the remote in the dark. An LED mute indicator and backlit volume adjuster buttons would make the Cloud II’s remote even better.

Although the memory-foam headband on the HyperX Cloud II looks thin and sparsely cushioned, it’s offset by the headset’s relatively lightweight design—in short, it’s more comfortable than it looks. It’s not in the same league as suspension-headband headsets (which are among the most comfortable designs typically), but I didn’t find it uncomfortable either.

The superior inline remote is a definite plus, as is the flexible (and detachable microphone). However, note that the Cloud II offers virtually no appreciable sound isolation or cancellation, which can be good or bad depending on your preferences. It can be bad because it lets outside noise in, but it can be good because you can still hear your kids, wife, etc. if you need to. And the Cloud II gets plenty loud enough to compensate either way.

The HyperX Cloud II’s 53mm drivers sound crisp and deliver big, thunderous AK-47 gunfire in games like Left 4 Dead 2. The Virtual 7.1 sound is, however, something of a letdown and barely discernable from good stereo sound—at least with regards to the quality of the directional audio. The 7.1 button on the inline remote seems to just make the sound a little bigger and more encompassing but it doesn’t really enhance the quality of the directional audio.

This is somewhat expected from surround sound headsets which are pretty limited when it comes to surround sound. But there are some headsets that offer better directional surround sound (which is more important for gaming) than the Cloud II. The Cloud II doesn’t require any additional software drivers, which simplifies setup but also means fewer options for tweaking the audio, and fewer features overall compared to some competitors.

Regardless, the Cloud II still sounds excellent in music, games, and movies in general. And the microphone does its job well enough for gaming (although it seems a touch quiet, subjectively speaking). All that really just means is that I found nothing to complain about, but nothing exceptional either in terms of recorded sound quality either.

For about $100 the Kingston HyperX Cloud II is a solid choice for a PC gaming headset. It plays well with consoles and mobile devices, includes alternative memory-foam ear cushions, and with the added carry bag it even travels well.

Report Card: The Last of Us Pt. II (REVIEW)