Kalypso’s Dungeons 2 is the first, best, and to date most successful attempt at bringing back the largely dormant ‘sim dungeon’ genre. Kalypso doesn’t just get the formula right—they add enough extra flair to put an extra HA on your Muhahaha.

Sorry Electronic Arts, but you dropped the ball (again) on another franchise, and now you’ve gotten your just desserts for that misguided mobile attempt at reviving the once proud PC classic, Dungeon Keeper. Turn in your evil throne. European upstart Kalypso has eaten your lunch.

Truthfully, it’s hard to believe it took someone this long to finally get the ‘sim dungeon’ formula right. The formula was nearly perfected by Bullfrog’sDungeon Keeper games 15+ years ago. All someone had to do was replicate it without trampling any intellectual property rights. 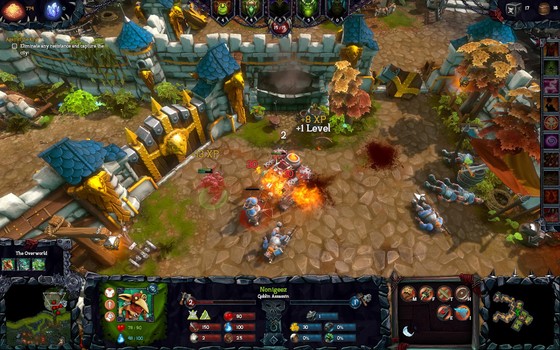 Even Kalypso’s first attempt at the genre (Dungeons) fell pretty flat, but they were smart enough to go back to the drawing board—or at least dust off someone else’s drawing board and give it a makeover. And while they certainly (and blatantly) replicated many of Dungeon Keeper’s mechanics, they also innovated on the formula by adding more traditional real-time strategy elements to the mix. Although a bit light tactically speaking, they still add a new dimension to the formula that makes it no less satisfying. If EA hadn’t all but killed the Dungeon Keeper franchise, I suspect it would have evolved in a similar way.

Vengeance will be yours…

In Dungeons 2, like Dungeon Keeper, you carve out a dungeon and recruit an army of creatures, all the while putting traps and defenses in place (a tower-defense-like element) to protect your dungeon from those damnable adventurers—and later in the game, a pretender to your evil throne. Once your army is strong enough, it’s time to strike forth into the rainbow-bunny-elf-laden over world where you’ll bring fire, smoke, and vile darkness as only the Ultimate Evil can.

And all of it is brilliantly and sometimes hilariously relayed through the sardonic and cheeky narrator, who riffs liberally on fantasy pop-culture references and isn’t afraid to interrupt you for a commercial word from Kalypso. “Buy Kalypso games. Buy a lot of them.” He also calls you an arse, reads script notes improperly, and breaks the 4th wall liberally and repeatedly to great effect. In short, he’s immensely entertaining, although you may periodically wish you could slap him like a minion. (Did I mention minion-slapping? Yes, you can do that in Dungeons 2—so slap away.)

The forays into the over world are reminiscent of Warcraft III in look and feel, although they are generally less challenging from a tactical standpoint. Most excursions take the form of raids, destroying human outposts, neutral creatures, and reaching specific objectives—that is, until your army is strong enough to largely stomp across the map unchallenged and pull every last wing off of every last frickin’ fairy. You can kill fluffy woodland creatures on a whim to absolutely no effect other than the glee of feeling evil.

Admittedly, the RTS portions of the game certainly aren’t on par (tactically speaking) with the likes of StarCraft II. To a large degree, you can win a lot of battles with the ‘select-all-your-units-and-click-the-enemy’ method. Regardless, it still adds an enjoyable (if perhaps a bit fluffy) layer to the overall game. It may not be hard, but it’s still satisfying to raze the rainbow-filled world of bunnies and unicorns. I mean c’mon, these guys are just asking to get ganked.

The real fun is building up your mighty horde in the first place, and then having them storm through the over world in an unstoppable tide of fire and bloodlust. This is made all the more satisfying because the territory you capture in the over world is immediately ‘Evilified’, and turned from happy-rainbow-land to the suburbs of Mount Doom, mired in smoke, fire, and endless crevasses that will forever echo your Muahahahahas. (Perhaps more importantly, you can only cast spells – lightning bolts, buffs, etc—in territory that is under your influence.)

Building up your mighty horde of trolls, orcs, nagas, and goblins into…well, a horde— is the real meat of the game. You start with your humble throne room, some ‘Snots’ (minions), and must begin mining gold and building basic facilities to begin funding your evilness. You’ll need a treasure room for gold, a brewery to make beer (the ‘food’ that supports your creatures), and a tinkerer’s cave where your goblins can research and craft traps and room upgrades.

And those are just the basics. Soon you’ll want a training room to upgrade creatures, a hospital where injured creatures can heal, and mana rooms (which are built around mana crystals) where nagas generate mana for spells and research new ones. A little later in the game you can build a Chaos Forge, where trolls can craft all kinds of upgrades for all of your creatures—improved armor, new abilities, and more.

Periodically while you’re managing and building all of this, enemies will enter your dungeon and make a beeline towards your Dungeon Heart. Welcome to Evil Tower (Trap) defense.

Early on these incursions can usually be handled by a few orcs, but eventually you’ll want plenty of doors and traps to handle most of the work because your hordes of monsters will be away pillaging the countryside.

Exploding chests, tar pits, spike pits, and more can be built to create Corridors of Doom deadly enough to handle almost all incursions without your creatures needing to lift a finger, talon, or fang. It’s also just plain entertaining to watch a bard try to disarm a trap while some of his colleagues trundle forward past him into the next trap and blow themselves to hell. Trust me when I say it will bring a smile to your evil, snickering face.

Once your dungeon is secured well enough, you’re free to command the utter and total destruction of…well, everything you’re supposed to destroy—which is usually everything. Because you’re going to make those rainbow-colored tree-huggers pay for what they’ve done to you. They will pay. They will all pay. Dearly.

Once you’ve Mua-ed your last Ha in the Campaign game, you can also play multiplayer, where the Demon faction and the Chaotic Evil (your evil nemesis) can match wits and dungeons against one another. But really, even if you only play the Campaign game, Dungeons 2 is well worth your time. It may not be perfect—it’s a bit buggy in places and could use a touch of spit and polish in its darker corners—but it heartily captures the spirit and mirth that made the Dungeon Keeper games so enjoyable.

For the love of all that’s unholy, if you were ever a fan of the Dungeon Keeper games you need to buy Dungeons 2. Immediately.