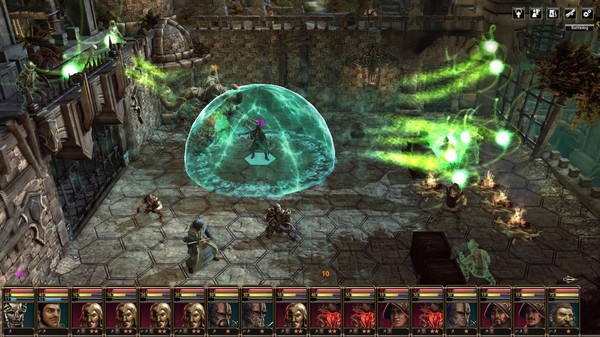 Blackguards 2 could likely succeed on its merits as a deep, tactical turn-based strategy role-playing game alone. But excellent writing, voice acting, and an engaging story catapult it over many of its peers and make the game even more enjoyable. If you’re a fan of the genre at all, Blackguards 2 is well worth your money.

Along came a spider

Blackguards 2 is another European property based upon a Fantasy Role Playing game called The Dark Eye. You play Cassia, a ruler who is betrayed and cast down into a prison, where she spends the next 4 years trying to find a way to escape. During that time she is also bitten by a Corapia (a large spider), the poison of which disfigures her and nearly drives her mad.
But Cassia, though perhaps a few clowns short of a circus at the end of her 4 years, doesn’t go completely insane. Driven by her thirst for vengeance, she uses her 4 years to study a book on tactics and harden herself into an instrument of destruction.
When freedom finally comes, Cassia immediately sets to her newfound purpose: taking her throne back from the jackass (a man named Marwan) that took it from her in the first place.

Your turn to rule

Tactical battlefield combat is the very meat of Blackguards 2,  a turn-based ‘SRPG’ (strategy role playing game) in which you command a party of units on a hex-based battlefield. In essence, it’s a computerized version of miniature warfare games such as Games Workshop’s Warhammer.

You control a small (4-20) group of units and heroes, and use their varying spells, talents, and abilities to reach your objectives—which frequently boils down to killing everything else on the screen. You can also set traps and use the environment to your advantage, moving or knocking over crates and barrels to obstruct enemies (or take cover behind them), igniting spilled oil to create a wall of fire, and more.

(Your enemies can do this as well, of course, although the enemy AI is a bit spotty and has a penchant for attacking innocent crates and barrels for no reason.)

During the prologue/tutorial levels, Cassia recruits 3 companions: Takate, Zurbaran, and Naurim. Takate and Naurim are basically warrior types, and Zurbaran is a mage. Because the game was thoughtfully written and well voice-acted, your companions are much more interesting than nameless, colorless, and otherwise generic ‘hero units’ typical of tactical games. In between battles you can talk to them to learn more about them, as well as upgrade their various skills and abilities.

In addition, you will gain control of Mercenaries (essentially non-hero units). Like your heroes, they can also be upgraded with improved skills and talents, although this is reliant upon completing certain missions to unlock improvements. In practical play, the mercenaries are valuable but generic footmen, spearmen, and archers (and cannon fodder) to back up your heroes with.

Meanwhile, back at camp…

At the end of each battle you gain money, plundered goods (armor, weapons, potions, etc.), and Action Points.

Money can be spent purchasing new and better equipment between battles, and Action Points (experience points) are spent on character upgrades. There’s an extensive array of skill, spell, and talent upgrades for characters—far too many to enumerate, but suffice to say there are more than enough to provide plenty of flexibility and depth to character development.

There are no discrete classes or limiting advancement trees in Blackguards 2, but this also works against it in that the game offers little in the way of guidance to help you make smart decisions when upgrading skills.

It’s very easy to spend action points without realizing the ramifications of your decisions, and then potentially doom yourself to failure (or at least a lot of frustration) later in the game.

Not just for Nerd Core — but mostly

A simple and accessible ‘respec’ option would help rectify this and enable more freedom to explore different paths. The game’s tutorials are also pretty basic and (not surprisingly) require a lot of reading. This isn’t uncommon for the genre because extensive tutorials, which improve overall accessibility, are costly to produce—and therefore often minimized to reduce overhead. (On the plus side, there is an ‘easy’ difficulty setting for the game that you can change at any time.)

The ability to save during a battle would be appreciated as well. Turn-based battles can be a lengthy affair, and it would be nice to be able to save mid-battle and return to finish later. The enemy AI looks like it could stand an upgrade too—as mentioned previously, it seems prone to making odd and sometimes nonsensical choices.

For example, in one battle some enemies kept destroying crates and barrels even though they were 2-3 turns from even being in combat range. “I don’t see anyone to attack, so I’ll just walk over here and destroy my hated foe, the barrel!”

Blackguards 2 provides plenty of tactical depth on the battlefield and deep character development. Combined with an interesting story, good writing, and excellent voice acting, Blackguards 2 rises above and beyond many similar games in the genre to deliver a compelling and entertaining tactical RPG.

If you’re a fan of the genre, pick this gem up on Steam.