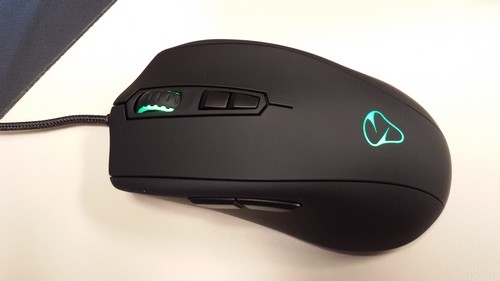 [Originally posted to my PC gaming Column at Examiner.com]

The Mionix Avior 8200 is an elegant 9-button gaming mouse with an ambidextrous design, a 32-bit brain under the hood, and a whole lot of rubber.

The Avior 8200 is another one of the growing breed of “smart” mice (like the SteelSeries Sensei) with a built-in processor—in this case a 32-bit ARM processor running at 72 MHz. In theory, the CPU in “smart” mice is supposed to reduce the burden interpreting and translating mouse movement to cursor control places on your CPU and driver software.

In practical terms, however, sticking a cheap processor inside of a gaming mouse is probably just a glitzy gimmick that makes writing feature points for the Web site and box easier. I can’t honestly say I’ve ever actually noticed any real-world benefits from a “smart” mousewhen compared to a plain old dumb one. Sensor technology and capabilities have already advanced to a degree far greater than what most of us need or use.

Regardless, the Avior 8200 still has a good feature set and scores well in overall performance and comfort.

Here’s a rundown of the salient features, courtesy of Mionix:

The Avior’s driver software provides all the general functionality you’d expect from a good gaming mouse: 5 configurable profiles, LED color customization, macro support, and adjustable DPI (200-8200DPI) for example. It has all the basics, but it does fall a little short compared to some of its competitors.

The most important one is the Avior’s macro editor, which is pretty rudimentary when compared to capabilities of Razer and SteelSeries software, for example.

The Avior’s software enables you to create multi-keystroke macros with or without recorded timing intervals, as well as fine tune a macro inside the editor. You can delete or change a specific timing interval between two actions, or insert a mouse event (left click, right-click, etc.) for example. The interface for this is fairly simple–right-click an event inside the macro to change it — but Mionix could have made this a little more intuitive within the software.

If there’s a small weakness in the Avior’s software, it’s that you only get different 3 DPI settings, and they are only adjustable in 200DPI increments. In addition, you can’t assign profiles to activate when a specific game is launched.

From a practical standpoint the Avior provides enough features for most gamers. Ultra-tweakers may want a slightly more granular, richer feature set.

The Avior performed well for general gaming and daily work. It’s rubber-ridged scroll wheel favors precision over surfing, which is perfectly appropriate for a gaming mouse. Soft touch rubber covers the Avior (there’s virtually no shiny plastic to complain about) to create a grip-friendly, comfortable mouse that is good for virtually any grip type (palm, claw, etc.).

Of the 9 total buttons, 4 (in addition to the left, right, and scroll wheel of course) are accessible and programmable, though you’ll likely only get 2-3 if you reserve at least 1 for DPI switching.

Smart or not, the Avior still has everything it needs to be a good consideration for a gaming mouse, but its roughly $85 street price undercuts its appeal a bit when compared to similar competitors, such as:

These are all gaming mice with similar feature sets but considerably lower prices.

The Mionix Avior 8200 is comfortable, feature-rich, and in general an excellent choice as an “all-rounder” gaming mouse. It would be even more so if Mionix lowered the price.

Maui 2019 sunset from the deck
Maui 2019 - Parasailing boat
Just tried these sauces at the Edmonds Farmer's Market. So good I couldn't get just one! Great heat *and* flavor! @seafiregourmet
Cleaning out my closet, found in the pockets of some ancient #sierraonline swag wear that has been in the back of the closet for 15 years or more: A 3.5" floppy disk, and possibly fossilized dinosaur fruit snacks.
Time to start getting the Xmas on. I damn near kill myself getting this tree out of storage every year. I need some low-rent elves. #xmas
From a recent birthday party for my son... some TRAXX action.