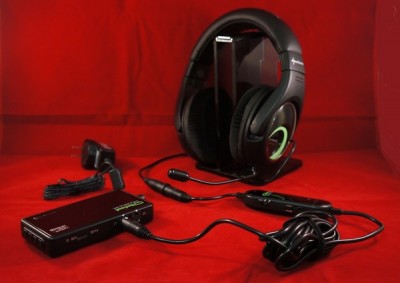 The Xtatic Pro 5.1 gaming headset proves to be an excellent multiplatform, surround sound gaming headset for console and PC players alike. And if you don’t mind a couple extra cables, you can connect it to damn near anything. Just be prepared to connect stuff. A lot of stuff.

The Sharkoon Xtatic Pro 5.1 gaming headset features a total of 8 speakers (4 per earpiece) to help it deliver more realistic surround sound—or at least about as good as you can get from a headset. Multiple drivers are increasingly common in gaming headsets to better reproduce surround sound audio. (And it’s a pity more PC games don’t actually support 5.1/7.1 surround sound.)

The real magic of the Sharkoon isn’t in the headset but in the SCU (Sound Control Unit)—a small black decoder box that connects to virtually any game or audio platform and supports Dolby Digital 5.1, Dolby Digital 2.0 and Dolby Pro Logic II sound formats.

The Xtatic Pro SCU has features the following connectors:

The AC adapter even comes with 3 interchangeable plugs (UK, US and EU). What this boils down to is that in addition to using whichever connectors you require for your PC’s audio system, you have to add to the mix a USB cable for the microphone, and an AC adapter for the SCU. (For my own setup, I used the SPID/F connectors—SCU to headset, and SCU to a combo DVD player/5.1 receiver.)

Comfort & design
The Xtatic Pro’s ear cups are lined with soft, cloth-covered foam that offer good comfort and accommodate my gaming glasses pretty well. The headband is lined with moderately thick leather (or faux leather) for what is overall a generally comfortable fit. I wouldn’t rank the Xtatic Pro’s overall comfort quite as highly as Turtle Beach Z2’s and their luxurious, oversized ear cups, or the ultra-light SteelSeries Siberia V2, but I never found the Xtatic Pro uncomfortable either.

In addition, as stated earlier the Xtatic Pro has one of the better inline controllers I’ve used. It’s large and easy to find, I like the LED indicator, and the ability to change channel volumes independently of one another. The microphone is the ultra-flexible “twist tie” variety, which is generally my favorite style of mic. It’s fully detachable but PC users must connect a USB cable to use it.

Performance
The Xtatic Sharkoon Pro impresses with solid audio quality. Highs remain crystal clear even at nigh-painful volume levels. The bass does muddy up a tad at maximum volume, but that’s about the worst I could say for it. Left 4 Dead 2 remains one of my favorite test beds for surround sound, and the Xtatic Pro performed well, helping to keep me safe from Special Infected (Boomers, Hunters, etc.) because I could discern their general direction pretty well prior to an attack. (By the way, if you haven’t already, install the Stay Puft marshmallow man mod.)

I also tried out the Xtatic Pro watching the Blu-Ray version of Iron Man in 5.1 audio. Playback quality was excellent and surround sound was quite good (for a headset)—again, it’s certainly not a replacement for a nice surround speaker system, but it was still cool hearing sounds off to the right (for example) and hearing the chaos of screams and explosions engulf me while Iron Mani escapes from his captors.

Aside from the additional cable clutter required for a PC setup, the Xtatic Pro scores above average to excellent in virtually everything I’ve thrown at it—surround sound games, general music listening, and a little Skyping for good measure. Sound quality is its best feature, but the Xtatic Pro scores well across the board. Add multiplatform capability and you’ve got a headset that can pretty much “do it all”. But with power comes great…price — around $180 at online retailers like Amazon.com.

Antonio’s Most Anticipated games of 2021