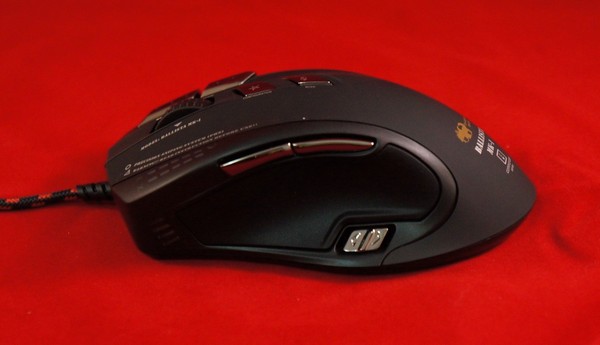 You may not have heard of Shogun Bros. before because they are based in Hong Kong and have fewer distributors in the United States (Amazon being one of them). But to date Shogun Bros. are still responsible for one of the most innovative, ambitious gaming mice I’ve ever reviewed: The Chameleon X-1—a wireless gaming mouse that you can flip over, pick up, and use as a fully functional game pad. (And believe it or not, the X-1 does an admirable job at both functions, although it doesn’t quite achieve the married perfection of peanut butter and chocolate.)

The Ballista MK-1 isn’t as ambitious as the Chameleon X-1 but Shogun Bros. have still managed to produce a worthy contender for your gaming dollars that boasts excellent comfort, good design, and a generous range of features for a price the same or below many of its competitors.  [Read more Gaming Mouse Reviews @ Examiner.com]

Features & Technical Specifications
Like many newer gaming mice, the Ballista MK-1 sports a sensor capable of resolution/speed probably higher than you’ll ever use (8200 DPI (dots per inch). Most of its other features are fairly common to most gaming mice, including extra buttons, support for multiple DPI settings, and the ability to create and store macros. Here’s the basic rundown:

Ergonomics & Design
The Ballista sports a comfortable right-handed shape that provides both a nice ‘cradle’ (resting spot) for your thumb that is both comfortable and keeps it at a good position from which to reach the 2 thumb buttons. The Ballista MK-1 also sports comfortable, contoured ‘shelves’ for your ring and pinky finger.

The top of the Ballista is coated in smooth, soft touch material and the sides are textured plastic, and overall it earns high marks for its overall shape, smart design, and comfort.

A blue LED indicator (4 bars) on the thumb side of the mouse indicate your current DPI level, and they are placed within easy view of your peripheral vision. In addition, the scroll wheel and mode LED on the top of the mouse change color to indicate which of the Ballista’s 5 profiles you’re using (Red, Green, Blue, Pink, Cyan).

The Ballista’s scroll wheel provides a good balance between tactile, click-by-click feedback for gaming without being too stiff for casual web surfing and regular computer use. The gaming buttons along the right side of the right-mouse button are shaped slightly differently and have small tactile bumps to help you differentiate them by touch; the top most button has 3 bumps and the one below it has 2. It would have been nice if the thumb buttons sported the same textured design. It’s not as effective as button designs like those found on Logitech gaming mice, but it’s still a smart design.

The dedicated profile switching button and the ‘sniper mode’ button could be a little better placed. You have to curl your finger back quite a bit to use them. On the other hand they are not buttons you’re likely to use frequently.

The dedicated DPI Switching button is the only button I don’t like. It’s much too stiff and you have to “claw up” on the mouse to stabilize it in order to slide it forward or backward. Stiff buttons like this killed the Corsair MMO mouse because it plagued the entire button matrix on the side of the mouse; fortunately, on the Ballista MK-1 it only plagues this one button, and it’s not one you may use frequently.

Performance & thoughts
The Ballista MK-1 performed flawlessly in Borderlands 2 and Tribes Ascend (in addition to Dead Island GOTY, which I picked up for a scant $7 during the Steam Holiday Sale).

My only gripe other than the stiff DPI switching button with the Ballista is its software, and it’s a pretty minor one. On the whole the Ballista’s software is actually pretty good, but the macro programming interface could be streamlined. The MK-1 software features a ‘drag and drop’ interface for its macro programming that works well enough but needlessly complicates things, if only because it’s a bit different from most of the gaming mouse software I’m accustomed to.

Regardless, the Ballista MK-1’s macro recording capabilities are still quite good and very flexible. You can choose to record intervals, not record them, or insert specific intervals (31ms, whatever) of any value into any macro you create. You can also freely mix and match mouse and key functions. And once you’ve created a macro, you can use the drag and drop interface to go back and insert a delay, an additional key press, or other actions.

Overall: 4/5 Stars
The Ballista MK-1 earns top marks for comfort, and it offers plenty of powerful, flexible features that should suit just about any game you could throw at it—and it does it for a price point that is at or below many products offered by their stateside competitors.